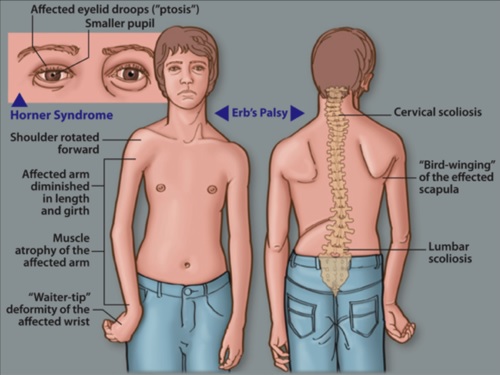 In Erb’s palsy, the brachial plexus, which is a collection of nerves that run down the spine and gives feeling to the arm, is damaged. Most times, this damage is due to an injury that occurs at birth like excessive pulling of the head or shoulder of a baby as it leaves the birth canal; the position of the baby in the birth canal; and a baby getting “stuck” in the birth canal, such as at the shoulders.

Erb’s palsy is marked by a numbness or weakness in the arm, limited motion of the arm, the arm is rotated to where it’s turned inward and hangs on the side, and even partial to total paralysis of the arm.

Another difference between Erb’s palsy and cerebral palsy is that while the latter does not yet have a cure, the former tends to cure itself. If the injury does not heal itself within six months after being diagnosed, then that is when the child will likely need to complete physical therapy, occupational therapy, or even surgery.

Remarkably, most children who suffer this condition almost always heal to where a person may not ever even be able to tell that a person had Erb’s palsy as an infant. This is because the damage to the brachial plexus is mild to moderate. Though this is not always the case, the prognosis for Erb’s palsy is very good. When the damage to the brachial plexus is more severe, this is when the child will likely undergo surgery, and even still may have a lasting physical deformity.

Regardless of a child’s degree of Erb’s palsy, it’s important to give that child the emotional support and social interactions they will need and that will ultimately aid in their recovery. For children suffering from lasting Erb’s palsy, it’s even more critical that they are engaged with other children with the same prognosis so that the child feels less alone and less stigmatized since the lasting forms of the condition often result in physical markers, which can make a child feel they “stand out” too much. Finally, as a parent to a child with this condition, it’s important to find a support group that will help guide the parent through the common questions, feelings, and conflicts that may arise.

This is a brief excerpt on Erb’s palsy, but parents who are learning that their child has it are greatly encouraged to research more on the condition.