The Jewels of the Nizams of Hyderabad State are one of the largest and most expensive collections of jewels in India. The jewels are the property of Nizams. After the seized all the property of their kingdom by India Government, Nizam accept that it was a national treasure and sell it in low price to the government of India. The early 18th century to the early 20th century jewel crafted in gold and silver are the treasure of Nizam. The jewellery set with Colombian emeralds weighing nearly 2,000 carats (0.40 kg), 99% diamonds from the Kollur Mine in Guntur, diamond mine in Krishna Burmese rubies and spinels, and pearls from Basra are the jewels of Nizam. There are total 173 jewels. 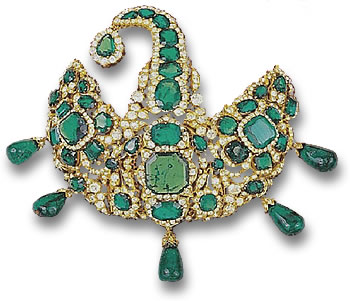 History of the jewels

In 1995, the Indian government bought the jewels for ₹218 crore, after the death of Last Nizam  Mir Osman Ali Khan in 1967 of Hyderabad. In reality, the Nizam agreed to sell the famous collection to India to evade tax. The single legitimate heir Mukarram Jah’s share of the sale was $20 million, but lawsuits have ensured that he has never receive any money, as the case disappeared down the black hole of Indian legal system.

The collection is with the Union Government and deposited in the vaults of the Reserve Bank of India. It has showcase  few times in exhibitions; in 2001  at the National Museum, New Delhi and in 2006 at the Salar Jung Museum, Hyderabad.

CHINTAAK or JADA HUA LACHCHA : The chintaak  commonly known as a choker is a part of Hyderabad’s legacy. It was named as chintaak in Persian language and in Urdu it was called as Jada hua lachcha . Studded with uncut diamonds in 18 carat gold bases and a green emerald hanging down to complete the look. If we just consider the gold used in making this type of gold necklace designs in 25 grams with price varies with weight is sound impossible.

MAANG TEEKA: Maang Teeka is the traditional ones are studded with almas and  pearl drops hanging down. The teeka used to be the symbol of pride of the wives of families and the queen. The round shape of the teeka is a symbolized shield and the two bead heads on the teeka symbolize the handles of the swords.

KARAN PHOOL: Karan Phool or the jhumkas are the flower studded with almas and pukhraj with a studded jhumka hanging down.

SATLADA :  It is an aesthetically beautiful neckpiece with seven layers embedded with pearls or gems. It is a layered piece of jewellery for bridal in India. Satlada is origins from a place called Basra. Traditional Satlada is supposed to have 465 pearls healthy dose of diamonds embedded on it. Satlada was part of the jewels of Nizam and like by Mughals.

JHOOMAR: Jhoomar is  part of the Hyderabadi bridal jewellery. Decorated with emeralds and almas in 18 carat gold attached with Hyderabadi pearl strings.

JODA: Studded Hyderabadi bangles known as Joda. A set of 14 bangles are wore in both the hand. We can assume each 10 gram gold bangles designs with price not less then Rs.30,000.